Competition is underway at the World Porridge-Making Championships, held in the Highland village of Carrbridge, with the inaugural contest for the Silver Spurtle held in front of a near capacity crowd.

The Silver Spurtle, sponsored by Centurion Plumbing Services Ltd, follows the exact same rules as for the Golden Spurtle, but with one key difference – all the contestants are young persons under 16.

Each competitor had 30 minutes to produce a traditional and speciality dish for judging.

Judge Neal Robertson said: “This is a fantastic innovation. We are truly impressed  at the ambition and organisation of these young competitors and very glad that they are not competing tomorrow!”

In coming to their decision, Judge Peter McNab said: “That was really tough. The standard was very high in both categories – congratulations to all!” Judge Lynn Benge added, “but we’ve chosen a good winner!”

Hjalmar Nofors for his Speciality dish of Go Gröt (Good Tasty) Porridge – add mashed bananas and cinnamon to a base porridge, add 12ml Scottish whisky. Serve with cloudberry jam and Russian yoghurt and sprinkle with cardamon.

Local lad Carlin Beattie of Carrbridge was the winner of the Traditional competition for the best porridge made from just oatmeal, water and salt. He carried off the Silver SpurtleTrophy and goes down as the first winner of what will undoubtedly become a coveted award.

Event Coordinator Charlie Miller said “We are thrilled with the interest the Silver Spurtle competition has attracted both locally and internationally, and look forward to seeing this new generation of porridge makers coming through, perhaps even to challenge for the Golden Spurtle in the years ahead. 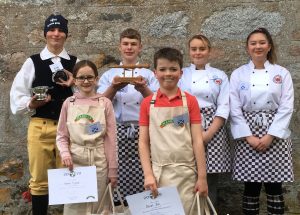