The first Golden Spurtle World Porridge Making Championships were held in Carrbridge on Sunday, 11th September, 1994 and the 25th on 6th October 2018. A short film of that event is available here – thanks to Aaron Leung who created it with content from James Ross, Fergus Thom and 3Bears.

Roger Reed was the creator behind the event, who was the owner of the Fairwinds Hotel, Carrbridge and secretary of the Carrbridge Community Council. The idea of the Championship was to raise the profile of Carrbridge and of porridge rather than to raise funds. At the time Roger was quoted in the local press “it is a very healthy food and we should make more people aware of this”. 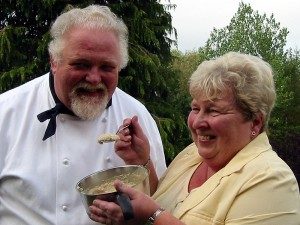 In 2012 Roger recalled the first competition:

“At the time I was a member of the Community Council and, I think, the village tourist organisation. I was out walking the dog in the woods behind Fairwinds one day, thinking of how to promote Carr-Bridge. I knew that other small villages around the country, UK, had world championships, conkers, tiddley winks and marbles etc., what could Carr-Bridge do? I used to make the porridge at Fairwinds and the idea of World Porridge came to mind. I went down to the Ecclefechan (Restaurant) to put the idea to Duncan Hilditch. In a very short time we decided that it would be possible to hold a competition in making porridge. Everybody had their own way of making porridge, could we find the best. Duncan was sure that he knew enough top chefs to act as judges. We then drew up the rules for making basic porridge. We decided that to add interest we would add a speciality section where the competitors could let their imagination take over. It was probably all sorted out in an hour or so. Duncan sorted out the judges, I organised the event. I put the idea to the Community Council, they approved and funded the initial event and subsequent years. It was never intended to make money but not lose too much. Simple idea really.” 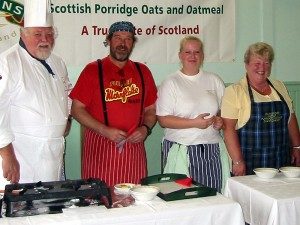 Roger and his team sent out over 700 invitations to take part in the competition, to B&B’s, guest houses, restaurants throughout Scotland. Anyone could enter. The competition was – and still is – open to amateur and professionals alike. Entries that first year came as far away as Dunoon and Iona.

The first judges were from a catering background. Chief judge was Bill Kendrew, a catering lecturer at Telford College. He was assisted by Robert Bruce, chef of Baxters of Speyside and Derek Stewart a lecturer at Lauder College, Dunfermline. They gave each entry a thorough blind tasting.

Porridge lovers from all over Scotland visited Carrbridge for the first of the Golden Spurtle Championships but the first ever winner Florence Ritchie, owner of the Pine View B&B, Carrbridge, did not have to travel so far.

The first sponsors of the event were Hamlyns of Scotland, The Oatmeal of Alford and Border Oats. Today Hamlyns remain the main sponsor.

Apart from the traditional porridge making event there is also a trophy for the best ‘Speciality Porridge’, where competitors add a choice of ingredients to their porridge base. Today the Speciality porridge making section attracts a great deal of attention as the dishes become more and more creative, from savoury oatmeal bangers with porridge mash to blackbean patties. 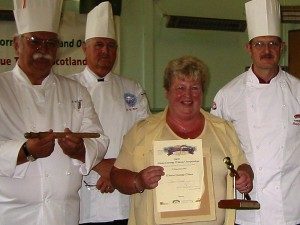 Over the years the competition grew partly due to increased recognition of porridge as a healthy, tasty and affordable food; the hard work of the organisers; but also due to the increased coverage and interest on the Internet, social media and global news coverage of the event; leading to more international competitors competing. In 2009 Matthew Cox from Oregon, USA was the first overseas competitor to win the Golden Spurtle and in 2010 Catherine Caldwell from Canada won the speciality porridge making section. Overseas competitors have come from many countries including Sweden, Ireland, Canada and the USA.

The introduction of a celebrity judge is a more recent addition to help promote the event to new audiences and ensure different opinions in the judges tasting room. Guest judges have included media personalities and food writers.

In 2009 to further promote porridge the Golden Spurtle organisers established the international World Porridge Day (WPD) to encourage people to organise local porridge events to raise money for charity. Mary’s Meals was selected as the suggested charity, as they raise money to feed children a fortified porridge meal in some of the world’s poorest communities at a cost per year of just £12.20 per child (2014 figure). Mary’s Meals now feed over 890,000 hungry children across 16 countries every day with WPD being an important event to promote their work. World Porridge Day is on the 10th of October (i.e. 10/10) every year and is now organised by Mary’s Meals. 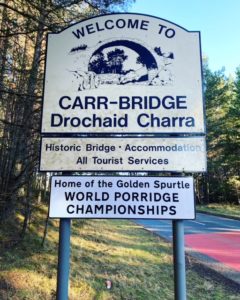 The Championships are organised and run by Carrbridge Community & Vicinity volunteers in collaboration with Carr-Bridge Ahead and the community council with the objective to promote Carrbridge and celebrate Porridge as a wholesome food.